Menu
GET THE BOOK
ACT NOW 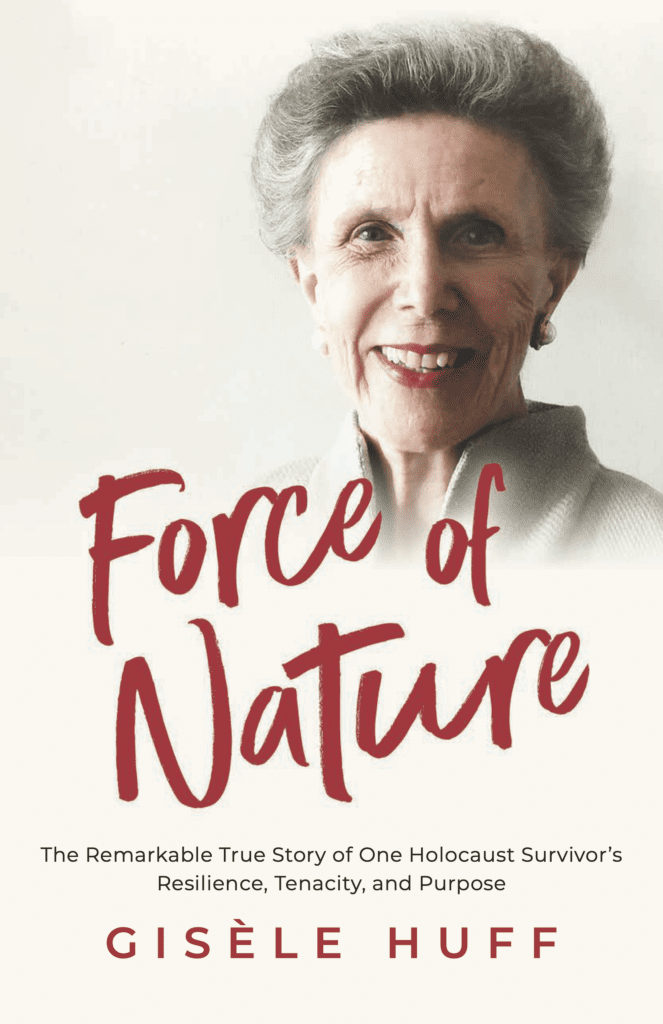 A MEMOIR BY AUTHOR GISèLE HUFF

The remarkable true story of one holocaust survivor’s resilience, tenacity, and purpose.

ORDER THE BOOK ON AMAZON

2020 Democrat presidential candidate and author of The War on Normal People
"Gisèle Huff tells a powerful story about tragedy, perseverance, and empathy for our fellow humans. Reading this book will undoubtedly help prepare you for life's challenges and successes. I count myself among the many people Gisèle has inspired throughout her life. Her drive to push America toward adopting a universal basic income has been important to me and is a reason why this idea was and remains so vital."

Former governor of Florida
"Beyond any doubt, Gisèle Huff has lived a life of real purpose and meaning. Force of Nature describes her life story, which is full of passion and grace. Among her many accomplishments, Gisèle's advocacy for customizing students' learning experiences will be long- lasting."

Founder and CEO of Khan Academy
"Gisèle Huff's life is indeed remarkable—and then some. Her vision and laser focus on transforming K-12 education moved major philanthropists to realize the critical role that technology plays in making education joyful and supporting all learners in realizing their goals. An early supporter of the Khan Academy, Gisèle serves as a constant inspiration for the work we do here. She was always there to help me believe in myself and what we needed to do to help hundreds of millions of learners around the world."

Founder of the Toigo Foundation
"When anyone loses every male member of her family in the Holocaust and then her husband and son to cancer, and still summons the courage to fight for a better world, I pay close attention. Gisèle Huff's journey is a lesson in how to embrace every day with passion, generosity, and grace. This book will change you."

president emeritus of SEIU and author of Raising the Floor: How a Universal Basic Income Can Renew Our Economy and Rebuild the American Dream
"It's a rare moment when the title of a book captures the essence of its author. Gisèle Huff, a Holocaust survivor and immigrant who first fled and now fights injustice, is a true force of nature. Fearless, with the courage to speak truth to power, Gisèle displays a passion and honesty that has built bridges and incubated new ideas for our country. Whether pursuing disruptive innovation in improving education for all children or offering solutions to the potentially devastating job displacement from the forthcoming technological revolution, Gisèle is relentless and tireless. After facing a series of heartbreaking tragedies, she offers personal insight and lessons on how to survive and persevere. An insightful read from a true mensch."

President, National Education Association
“I know first-hand that Gisele Huff is, in fact, a force of nature.  Her story of perseverance, growth, and generosity is inspiring. Through it all she has demonstrated her commitment to the power of education and to the priority of meeting individual students’ needs and preparing them for lives of purpose and promise.  Our enduring relationship and my deep respect for Gisele prove that mutual trust can indeed make it possible to work through ideological barriers to reach a shared aspirational vision.”

Former governor of West Virginia
"Any conversation with Gisèle Huff results in a positive whirl of disruption, challenge, and inspiration. All achievers can see around corners; Gisèle is one of those rare doers who removes whole structures that have long held us back. There are many conversations in this book—struggle, joy, anguish, accomplishment, hope—that speak to us as individuals and as a nation at a transformative time. Most importantly, this book provides the opportunity to engage with a remarkable person who constantly forces each of us to examine the present to envision the future."

Founder and chair of CityBridge
"Gisèle Huff's memoir is an engaging delight to read, filled with wisdom drawn from more than eight decades of exuberant life. The arc of the story starts as her family flees Nazi-occupied France and ends with an admonition against the resurgence of racism and antisemitism in America. In between is the story of her profoundly human-centered work in education, technology, and the universal basic income movement. Hers is also a deeply human story. Even in the face of profound loss, Gisèle summons an optimistic, hopeful, and determined framework for life. Her contributions and her indomitable spirit have made her a legend in the not-for-profit world."

California state senator
"Gisèle Huff takes us on her amazing journey through her survival of the Holocaust, during which time her life was disrupted by evil, and her years devoted to positive, innovative disruption for the benefit of humanity. Not often are we privileged to share in the intimate details of a life that begins in Nazi-occupied France, then, through dedication and brilliance, effectively pursues national education reform here in America before inspiring the top social, economic, and political titans of our millennium to tackle the future shock of economic displacement with the guaranteed income remedies for which she has become a force of nature."

director of Othering and Belonging Institute and professor of law, African American studies, and ethnic studies at the University of California, Berkeley
"Gisèle's life is one directed by recognition of people's humanity, a solid basis for a life spent as a bridge builder. The impulse to connect and listen is how we met, and these pages detail her evolving inquiry into a world of connection. This beautiful book tells the story of struggle, growth, and the process of a life well lived."

Author of "From Reopen to Reinvent: (Re)Creating School for Every Child"
"She's not just a Holocaust survivor. As Gisèle details in this tour de force of her life and impact, she's a thriver who has helped transform minds, conversations, and lives—including mine. The embodiment of the American dream resides in these pages."

UBI advocate
and author of Let There Be Money
"Towards the end of this incredible book of an incredible life put to words (which I blew through in one five-hour sitting), Gisèle Huff writes, 'I am a survivor because life is the most precious of all things, and what you do with it is the reason you are living it.' If there's one thing I hope readers walk away with from this book, it is that every human being deserves the opportunity to fulfill their full potential as empowered individuals and members of their communities, at as small a scale as the family to the larger scale of the nation to the largest scale of the entire human race. No one alive today does anything entirely on their own, and none of us would be where we are today without those who came before us—and those like Gisèle who do everything they can in the present to make a positive difference in this world, who truly believe in the torch of hope and hold it aloft to light the way for others. When Gisèle writes that the concept of universal basic income 'just happens to be the last, best hope for the human species,' know that these words come from someone who knows better than most living today just how bad things can get, and how great things can be, if we just set sail for a new world that we together—and only together—have the power to reach."

Co-founder
Economic Security Project
"Gisèle's riveting life is one of love, loss, and the persistence needed to make the world a better place. Her story spans eight decades and includes firsthand experiences of some of the most harrowing moments in history. Her intellectual and political evolution is a particularly important narrative in this moment of seemingly entrenched polarization." 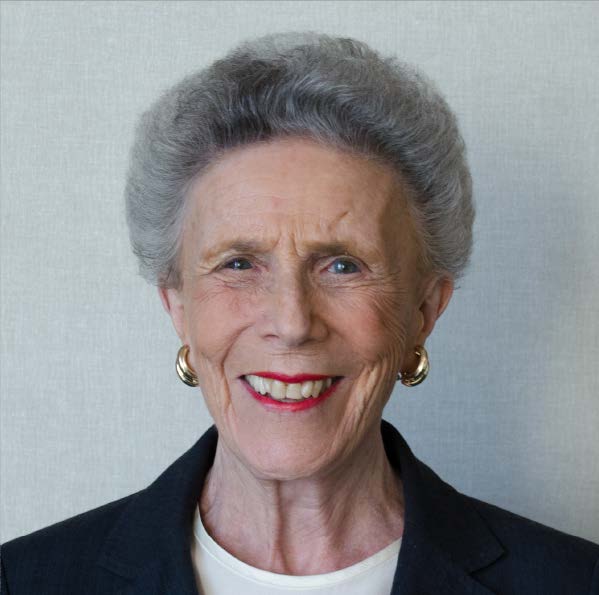 Gisèle Huff was born in 1936 in Paris to working-class Russian Jewish immigrants. She moved to the US when she was eleven and went on to earn a PhD in political science from Columbia University.

For more than two decades, Gisèle served as the executive director of the Jaquelin Hume Foundation, which invested in nonprofit, national organizations that worked on transforming K–12 education. She received the Thomas A. Roe Award and the iNACOL Huff Lifetime Achievement Award.

She is deeply involved in raising awareness about technological unemployment and promoting universal basic income, the legacy of her late son. She is the founder of the not-for-profit Gerald Huff Fund for Humanity. She lives in San Francisco, California. This is her first book.

ABOUT THE GERALD HUFF FUND FOR HUMANITY

A conversation with “Force of Nature” author Gisèle Huff

A Podcast with “Force of Nature” author Gisèle Huff

LISTEN TO THE PODCAST

The Frankie Boyer Show
LISTEN TO THE PODCAST

with Michael Horn
WATCH THE VIDEO

Gisèle Huff was born in 1936 in Paris to working-class Russian Jewish immigrants. She moved to the US when she was eleven and went on to earn a PhD in political science from Columbia University. For more than two decades, Gisèle served as the executive director of the Jaquelin Hume Foundation…
Their Story Matters with Sara Troy with her guest Gisèle Huff
SELF DISCOVERY ORCHARD OF WISDOM PODCAST COMMUNITY

A MEMOIR BY AUTHOR GISELE HUFF

The remarkable true story of one holocaust survivor’s resilience, tenacity, and purpose.

ORDER THE BOOK ON AMAZON

Get the latest articles on Universal Basic Income